Week 9 of sheltering in place due to the corona virus saw a slight up-tick, thanks again in part to improving weather.  Things got off to a slowish start on Sunday, where I came in just over 3100 steps.  Monday saw a slight increase, up to 3600 steps.  Tuesday was even better, with 4500 steps.  Wednesday fell back down to 3100 steps.  Thursday was the low point of the week, as I dropped back down to 2500 steps.  Friday saw a big increase, jumping back up to 4800 steps.  Saturday, I managed to improve that total all the way up to 6600 steps, thanks to trips to Mariano’s and multiple Jewels.

Week 8 of sheltering in place due to the corona virus saw a slight up-tick, thanks in part to improving weather.  Things got off to a decent start on Sunday, where cleaning the garage floor helped push me up over 4800 steps.  Monday saw a decline down to 3800 steps.  Tuesday was a bit of a disappointment, as I managed to crack 2500 steps.  Wednesday was the high point of the week, as trips to Jewel and Mariano’s put me over my daily goal, with nearly 8000 steps, for the first time in 2 1/2 weeks.  Thursday was yet another disappointing day, as I dropped back down to 2100 steps.  Friday was the low point of the week, as I finished 4 steps shy of 1900.  On Saturday, I managed to improve that total all the way up to 2400 steps.

Another great week, as my streak of 50,000+ steps weeks hits 7, I broke 60,000 steps for the first time since getting back from Universal in June, and my consecutive days over goal streak reached 55.  Things got off to a slow-ish start on Sunday, as I puttered around the house before going to a wake to barely surpass my goal.  Monday and Tuesday came up with similar totals, thanks in part to similar trips to Mariano’s for lunch and trips to Hayley’s hotel to attend to her injured back.  Wednesday was the beginning of the March Madness Jiff challenge at work, where I am on a team with 3 levels of management above me, so I worked in a few extra walks during work to cross the 11,000 step plateau.  Thursday was even better, as a post-work excursion to Milwaukee to watch Purdue in the NCAA tournament helped me surpass 12,000 steps and garner my highest single-day total since the Sprint & Stride in September.  I spent Friday in an all day workshop, but an after-work walk around the neighborhood helped propel me to 9000 steps.  Saturday was split between a trip in to the city to watch rugby with Hayley followed by another trip to Milwaukee for the next round of the NCAA tournament, ending in an 8000 step day.

A few weeks back, I headed out on a road trip to Florida and Disney World by way of Virginia.  To say things did not go as planned would be an understatement.  This is the story of that trip.

The plan was to leave work around noon, thanks to a meeting I had with the fine folks in AF.  Our first stop was across the street at Mariano’s, to get lunch, snacks for the trip, and a opaque container that would allow Jeff to drink during the drive outside the view of law enforcement.  An hour later, we were on the road, with Val behind the wheel, me in the passenger seat, and Jeff and a case of Blue Moon in the back.  Our destination, Roanoke, Virginia, lay 700 miles away, with an estimated arrival time of 11:30 PM.  Jeff, thinking this road trip was taking place in the early 2000s, had brought along a collection of CDs for us to listen to, which lasted through much of the Illinois portion of the trip.  Eventually, though, we switched to the playlist I had put together, which led to the first amusing tale of the trip.

When Lily Allen’s hit song Fuck You came up on the playlist in Indianapolis, a not-so-slightly inebriated Jeff instantly took to its charms, seeing it as an anthem against his perceived work antagonists.  As the song played, he dialed it up in the iTunes store on his phone, passed it up front to make sure it was the right one, and then purchased it.  More on this later.

Speaking of drunk Jeff, his plan on drinking throughout the drive had an unintended consequence: our estimated arrival time.  He made the cardinal sin of breaking the seal, after which we needed to stop for him to use the bathroom practically ever hour.  Once you added in his smoking time, we spent approximately 20 minutes of every hour standing still, which pushed our expected arrival in Virginia well past midnight.  During one of these stops, in the lovely town of New Castle, Indiana, we even had to find a WalMart in order to replenish the supply of Blue Moon.  Eventually, we made it out of Indiana and into Ohio with Val still behind the wheel.  However, around 7 PM, things started to go wrong.

We were starting to go through some mountainous terrain when Val suddenly started to feel sick.  She pulled off at the next exit, found a driveway next to what appeared to be a trailer park, and stopped to walk around and catch her breath.  Meanwhile, Jeff, claiming he was now sober (but lying through his teeth) decided he would drive once we got back on the road.  I tried to stop him, but he had the keys, it was his car, and Val was in no position to back either one of us, so he won out.  Eventually, we tried to get going again, but had to pull off again at a gas station before we made any real progress.

While Jeff and Val came in and out of the gas station, I started looking for local hotels.  It was obvious at this point that we would not be making it to Virginia, so this was as good a spot as any to stop for the night.  The closest Hampton Inn was about 10 miles back in the other direction, so, after purchasing some Pepto-Bismal, we slowly reversed our course and found the hotel, where Jeff decided he and he alone could help Val, leaving me to babysit the car which he had left in front of the door.  Unfortunately for us, the hotel did not have any double rooms, so, after a bit of finagling, we ended up with 3 rooms for the night in Chillicothe, Ohio, a mere 300 miles short of our intended destination. 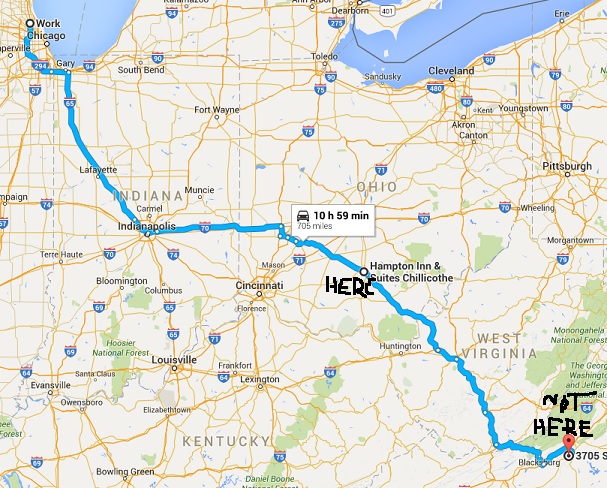 Waking up in beautiful Chillicothe, I showered and headed down for the free breakfast in the hotel lobby, where I ran into a now sober Jeff.  The day was off to a great start, as he had thoughts about this Hampton Inn and how it did not live up to his expectations for the chain.  I had a bed to sleep in and was able to make my own Belgian waffle, so I was content.  Neither one of us had heard from Val since the night before, so we were both anxious to see how she was holding up, hoping, of course, for the best.

END_OF_DOCUMENT_TOKEN_TO_BE_REPLACED

Once again, the week gets off to a disappointing start with a substandard Sunday, centered around a trip to Danny’s basketball game.  Things pick up slightly on Monday, though no coffee trip leaves me south of 6000 steps for the day.  Tuesday featured the return of the coffee run, pushing my total near 8000.  Wednesday was down again, with a big rebound on Thursday and Friday, thanks to two trips to North on the former and a post-work trip to Mariano’s on the later.  Saturday was once again back down below my goal, as I spent the day sitting around doing very little. 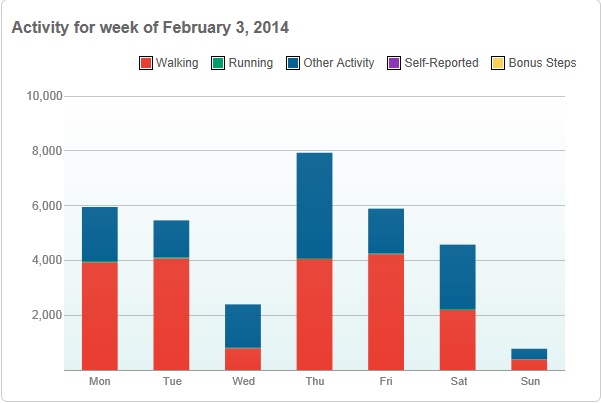 A somewhat decent week, with another day stuck at home due to the weather.  Monday and Tuesday were pretty typical work days.  Wednesday started by getting stuck in the snow on the driveway, so I spent the day at home trying to get the car moving while calling in to meetings all day.  Thursday was back to work, followed by quite possibly the worst night of bowling I’ve had in some time.  Friday included a post-work trip to H&R Block to get my taxes done.  Saturday’s activity was mostly going to Costco and Mariano’s, while Sunday was spent clearing off the DVR. 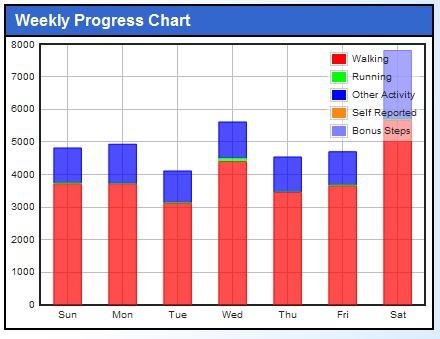 Despite only having 2 days over 5000 steps, all 7 days were over 4000, which is an improvement. Saturday even was the best day of the week, thanks to Mariano’s, Danny’s little league game, and the White Sox game at night. 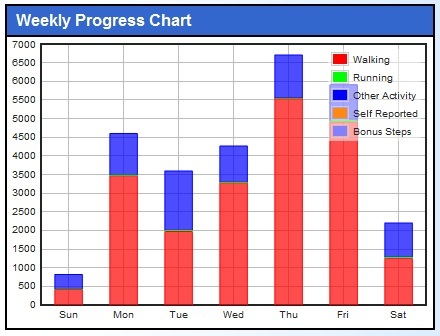 All things considered, it was a pretty decent week.  Tuesday topped 3500 steps despite being a WFH day due to the snow.  Thursday and Friday both topped the 5000 step mark thanks to trips to North plaza, for either meetings or a nice smoothie from Red Mango.  Saturday even managed to top 2000 steps, thanks mostly to a trip to the new Mariano’s grocery store.