When Sara Linton returns to Grant County for the first time since leaving following her husband’s death, she stumbles across a murder, a suicide, and a chance to settle some long-standing grudges.  GBI agent Will Trent joins her to investigate the crimes, and the local police department that seems to be covering up the whole thing.  When a second murder occurs, the coverup falls apart and one local detective puts her career on the line, comes clean, and teams up with Will to find the truth.

Broken, the fourth entry in Karin Slaughter’s Will Trent series and my fifth overall, feels like the wrap up of Slaughter’s Grant County series, which predated this one.  Having not read any of those books, I will say that I am now interested to see how there characters got to where they are here.  But first, there is the remaining entries in the Trent series to get to, all of which are waiting on my Kindle, except for the tenth which was just published last August.

With only four months remaining on the 10-year, $240 million contract signed following to the 2011 season, the Angels decided to cut ties with Albert Pujols, designating the future Hall of Fame baseball person for assignment yesterday.  “It’s more about opportunity,” GM Perry Minasian said of Pujols, to date, had posted an OPS 80 points below the league average in his age-41 season.  “Albert is not a bench player. We felt like, for him, with respect to him, keeping him on the bench, him not getting any playing time, would not do him any good or the team any good.”

Pujols is reportedly steadfast in his desire to continue playing, but it’s hard to see a good fit for him, especially with no DH in the National League.  Some speculation mentioned the White Sox as a potential landing spot, given the relationship between Pujols and Tony La Russa, but, unless Pujols is suddenly able to play the outfield, you would think the presence of Jose Abreu and Yermin Mercedes would preclude any such reunion.  If I had to guess, I would say this is the end of Pujols’ long and distinguished career.

Thanks to the profitable nature of the Cubs/Cardinals rivalry, I didn’t see Pujols play in person as often as I could have during his prime, but he’s still in the top 5 of games played for non-Chicago players in my history.  His numbers, both for games I attended and overall, were:

END_OF_DOCUMENT_TOKEN_TO_BE_REPLACED

A slight bounce back this week, though still a disappointing finish.  Things got off to a decent enough start on Sunday, as a trip down to Guaranteed Rate Field left me 6 steps shy of 5800.  Monday was slightly better, coming in above 6100 steps as the weather started to turn more spring-like.  Tuesday was the nicest day of the week, both weather wise and step wise, as I managed to surpass my daily goal with 7600 steps.  Wednesday was a down day, with only 3700 steps.  Thursday bounced back a bit, as I raised that step total to 5100.  Friday was easily the worst day of the week, with only 3300 steps.  Saturday used another trip to the old ballpark to finish with 5500 steps. 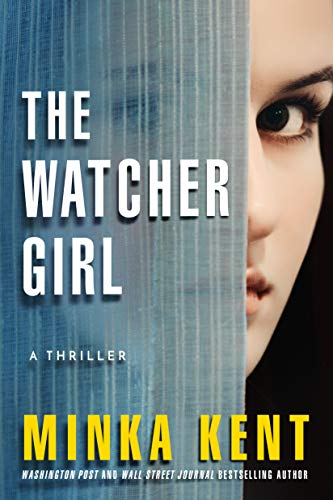 In The Watcher Girl, Minka Kent’s latest, a young woman, who has avoided her family for years, returns home to apologize to an old boyfriend, whom she believes to still be hung up on her.  When she accidentally runs into his wife, literally, she finds that he may not be the man she remembers.  Can she help her newfound friend escape before things go too far?  Or is the man she once loved still there somewhere, ready to return when she least expects it?

Minka Kent is a writer whose work has circled my awareness for some time now, but, thanks to the Amazon’s First Reads program, I was able to get this one early and free.  She doesn’t waste many words, with the book clocking in at under 240 pages, and the plot moves along quickly.  I found out after that many of these characters show up in a different novel, the story of which is touched upon here, and I was able to pick that up cheaply, so I will be revisiting Kent, and these set of characters, some time in the future.

The White Sox outfield is now down two starters after Luis Robert suffered a complete tear of his right hip flexor during Sunday’s game, general manager Rick Hahn said yesterday.  He won’t resume baseball activities for 12 to 16 weeks, whether he and the team opt for surgery or rest.  Robert, in his second season with the White Sox, was hitting .316 this season, with a homer and 11 runs scored.

Robert joins Eloy Jimenez on the injured list, after Jimenez tore his pectoral muscle during the last week of spring training and is expected to miss most, if not all, of the season.  Hahn says the team will rely on internal options to take Robert’s place, but will also explore external options.  Either way, this is a big blow for a team expected to compete for the post-season.

We wrap up the first three quarters of the list today with the next batch of 10 artists, with ties at 56th, 54th, and 50th.

The crooner from New Jersey and the leader of the Rat Pack jumps 19 slots thanks mostly to former White Sox third baseman Todd Frazier, who uses Sinatra tunes as his at bat music.

Adding a seventh song to my collection helps push the hip hop trio up 5 spots after a 104% increase.

64 new listens over the past 4 years enables the Chicago based alternative band to remain stable in the rankings.

The boys from Rockford, who I have seen open up for two other bands on this list, add an additional 67 listens, which puts them down 1 spot on the list.

Only 58 new listens over the past 4 years, a small 61% increase, led to a 5 spot drop for the Georgia rockers.

In 1929, uniform numbers appeared on the back of baseball jerseys for the first time, thanks to the Indians and the Yankees.  By 1937, numbers finally appeared across all uniforms, both home and away, across both major leagues.  Since that time, 81 distinct numbers have been worn by members of the White Sox, while the Cubs boast 76.

Today, we continue our look at those players, picking our favorite, if not the best, player to wear each uniform number for both Chicago teams with #57.  30 players have donned #57 while playing in Chicago, 17 for the White Sox and 13 for the Cubs.

Acquired by the Cubs, along with Matt Clement, in the deal that sent Dontrelle Willis, among others, to the Marlins in March of 2002, Antonio Alfonseca became the closer for a miserable 2002 Cubs team, which just so happened to be my first as a season ticket holder.  The 12-fingered Alfonseca went 2-5 with a 4.00 ERA and 19 saves in his first go-around with the team.  In 2003, he lost the closer role and was not particularly effective, going 3-1 with a 5.83 ERA.  He was suspended for 5 games in September after bumping an umpire with his generous stomach.  He was perfect in the post-season, appearing in 4 games total giving up no runs in 3 1/3 innings against the Braves and the Marlins.  He became a free agent following that 2003 season.

#57 has been a mainstay of the back end of the White Sox bullpen for many years, shared amongst such luminaries as Jace Fry, Zach Putnam, Tony Pena, and Boone Logan.

For May, we turn our gaze to the north and the great state of Wisconsin.  We start with two pictures from our miniature golfing stop during the road trip to Minneapolis in 2014, the first with Danny and Michael posing with a giant Bucky Badger and the second with Danny sticking his head in a plaster rhinoceros.  The final picture comes from 2019’s trip to Miller Park to see the Cubs battler the Brewers.

With a full year of baseball on tap after last year’s troubles due to a combination of the corona virus and needless labor squabbles, I thought it would be interesting to look at the all time leaders in both offensive and defensive categories for each month in games that I have attended.

The traditional beginning of the baseball season, opening day has played a part in my attending 155 games during the month.  I’ve managed to see a game on every day of the month, with 9 games on the 5th, 7th. and 12th and a single game on both the 1st and the 3rd.

Football for a Buck: The Crazy Rise and Crazier Demise of the USFL – Jeff Pearlman

Originally conceived in 1965, the United States Football League finally took shape in 1982, taking the field for the first time in the spring of 1983.  While not a huge success, the fledgling league showed promise.  For the 1984 season, the league, unwisely, expanded and brought in new ownership, including a young, brash real estate developer from New York named Donald Trump.  Angling for a merger with the NFL, Trump pushed the USFL to abandon the concept of spring football and, following that second season, the league announced that it would move its schedule to the fall and take the NFL on head-to-head.  Following a lame duck season in the spring of 1985, the future of the USFL depended on the vision of Donald Trump and the outcome of a lawsuit he thought would pave the way to NFL riches.

Even if you have never heard of the USFL, if you’ve lived through the past 5-6 years of American history, you can imagine how this turned out.  The NFL’s lawyers used Trump’s general unlikability and inability to be truthful against him.  When the dust settled, the USFL did indeed win their lawsuit against the NFL. with damages assessed at $1.  The league had followed Donald Trump into the abyss and, as a result, was out of business after only 4 years.

Jeff Pearlman recaps the strange experience that was the USFL in Football for a Buck.  The players, a mixture of over-the-hill NFL pros looking for one last chance, college players who couldn’t quite make it at that next level, and actual college star who were showered with money in an attempt to legitimatize the upstart league, joined a motley crew of owners, many of whom were not fully vetted and did not actually have the funds necessary to run a franchise, to make an entertaining product in hindsight, even if they didn’t get the full recognition at the time.  The parallels between Trump’s actions as the ringleader of the USFL’s destruction and his actions as president are uncanny.  All told, the story of the USFL is one that deserved to be told, and Pearlman does an admirable job in doing so.