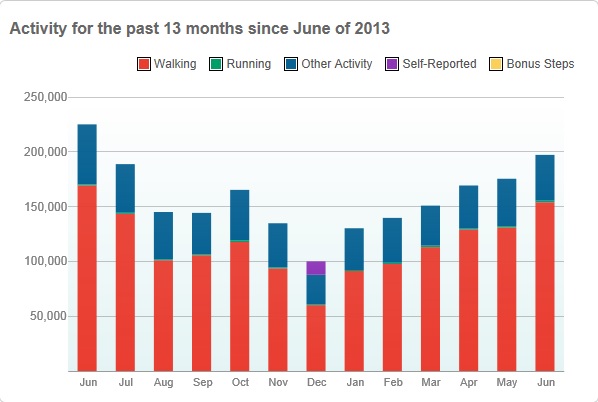 Last year, I set a goal of surpassing 5,750,000 steps, which would have given me a little less than 2.25 million steps for the year.  Sadly, I fell well short of that mark, finishing the year with at least* 5,385,696 steps.  My average step total per week was 34,885, which comes out to about 4983.6 per day.  The median weekly total was 34,390.  My best week was Week 39, which was the start of my trip to California this past spring.  My worst week was Week 24, which was during my winter vacation and fell victim to missing days due to (possible) battery issues.

For the upcoming year, there may be some changes afoot.  Rumor around the office is that we will be discontinuing the GlobalFit program.  For the time being, I will keep going as is, but there may be some adjustments along the way.  My goal for the upcoming year is to average 5500 steps per day, which would bring me to a yearly total of 2,002,000 steps.  I haven’t had much luck in meeting these goals as of yet, but, as I stare down my 40th birthday in a few months, I do have some extra motivation.

*The network that handles the transfer of data between the tracker and the interwebs has been down all week, so, combined with the holiday last week, leaves me without a few days of data.  Once the network comes back online, I’ll post an update with the new numbers.

This site uses Akismet to reduce spam. Learn how your comment data is processed.