We continue today with the next batch of 10 artists, with the 2 tied for 69th place followed by the single artists at 68th through 61st.

The six-time Grammy Award winners see a 110% increase in plays over the past 4 years, moving up 5 spots.

The one-time backup singer for Michael Jackson jumps 12 spots after adding 69 additional listens to the 8 songs I’ve listened to in my collection.

The composer of some of the most popular and recognizable film scores in cinematic history, including the Star Wars and Superman series, picks up 62 new listens over the last 4 years.

The inspiration for the musical Jersey Boys drops 10 spots after gaining a mere 46 new plays.

The California-based rockers, who I saw briefly at Lollapalooza back in 2016, increase their plays by 117% over the last 4 years.

Today, we wrap up the final two songs with 36 plays and move on to the first group of songs with 37 plays, according to my iTunes stats dating back to late 2007.

A nice debut for the first single from Kerosene Hat, which reached #3 on the Modern Rock Tracks chart and appears on Volume 12 of my mixtapes.

This remake featuring the cartoon duo also appeared on Volume 12 of my mix tapes.

A nice debut for the tune which peaked at number 21 on Billboard’s Bubbling Under Hot 100 Singles chart.

This tune was my initial introduction to the Canadian songstresses.

A small drop for the Chicago band, which, while never an official part of my victory playlist, would get pulled out on days former White Sox pitcher Chris Sale would pitch and win.

#79: Mott The Hoople – All The Young Dudes
END_OF_DOCUMENT_TOKEN_TO_BE_REPLACED

We have completed the first quarter of the countdown and, today, we finish up the final batch of songs tied for 144th place with 31 listens and move on to the first group tied for 125th since my stats began in late 2007.

An impressive debut for the song ranked #81 on VH1s list of Greatest One Hit Wonders and which appears on Volume 2 of my mix tapes.

Featured in Clue: The Movie, it is considered the first giant rock and roll hit after, along with Joe Turner’s version of the song, selling over 1 million copies.

A big drop for the B-side to the group’s first American single, it spent 11 weeks on the Billboard Hot 100, peaking at #14.

A bigger drop for the title track to both the album and the movie.

20 years ago, during my sophomore year of high school, I put together the first of what would become a nearly 20 volume collection of mix tapes, containing my favorite songs that I had gathered either from the radio, a cassette tape, or (eventually) CD. We last looked back at all 20 volumes three years ago to see which of my “favorite” songs still resonated in today’s digital world. Today, we revisit those mix tapes and see how, or if, things have changed in the past 3 years.

Volume 3 picks up in mid-summer 1990 and takes us through late 1990 and into my junior year of high school.  Featuring another steady stream of hair metal, with small selections of pop, rap, R&B, and dance thrown in for good measure, volume 3 also overlaps with the start of my relationship with my first “real” girlfriend.

2 Live Crew – Banned In The USA

The first song (as I recall) recorded off of B96, this protest anthem from 2 Live Crew, recorded after their previous album was declared obscene by a federal judge, increased its play total by 7 over the past 3 years.

The first single from Flesh & Blood , which peaked at #3 on the Billboard charts, managed to earn 3 additional plays since last time we did this check.

Poison – Nothin’ But A Good Time

Most likely originally recorded from The Blaze, the debut single from Poison’s previous album and arguably their second biggest hit, picked up an impressive 11 new listens over the past 3 years.

MC Hammer – Have You Seen Her

The unlikely cover of the 1971 hit by The Chi-Lites doubled up its number of plays over the past 3 years.

Cheap Trick’s last single to hit the top 40, the first release from their 11th studio album, which became “our song” between me and my first girlfriend, had a healthy increase of 6 listens over the last few years.

Nelson – (Can’t Live Without Your) Love and Affection

Matthew and Gunnar’s big hit, which topped the Billboard charts, nearly tripled its play total since 2015.

Thanks to prodding from The Adam Carolla Show, Warrant’s strip club anthem increased by 14 listens over the past 3 years.

The solo debut from the New Edition alumnus, ranked as the 23rd biggest hit of 1990, picked up 6 additional plats in the last 3 years.

END_OF_DOCUMENT_TOKEN_TO_BE_REPLACED

We continue the long slog towards the top with today’s entry, which includes:

A slight 3 spot drop for the band most well known for a Fruitopia commercial back in the day.

The British band rode the alternative wave of the early to mid 90s to have 6 songs make up their total, with 28 additional listens in the past 3 years.

An impressive 12 spot jump for the rap duo, who added 1 new track and 34 new listens over the past 3 years.

Only 25 new listens contributed to the 7 spot drop for the tippy band.

The composer of some of the most popular and recognizable film scores in cinematic history, including the Star Wars and Superman series, has a nice 32 spot jump thanks to 42 new listens over the last 3 years.

The favorite of strip clubs everywhere, and the Adam Carolla Show, added 34 new listens, good enough for a 9 spot jump. 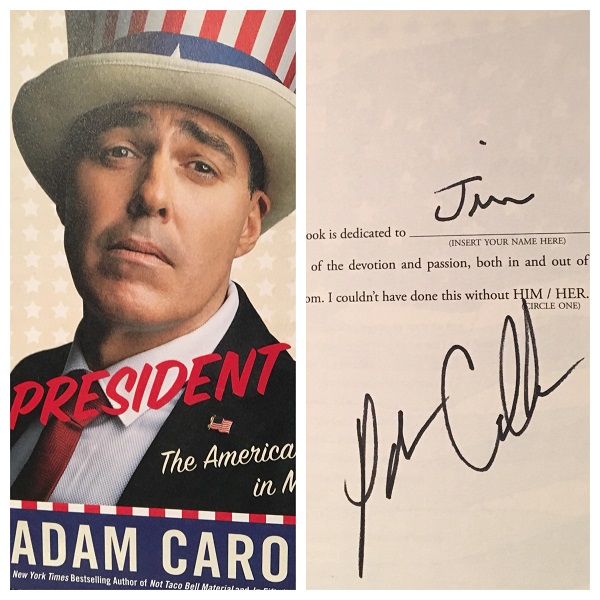 We continue our look at the hardcover books I’ve gotten autographed over the years with President Me by Adam Carolla.  This collection of rants from the Adam Carolla Show podcast goes over the things the Aceman would change were he to become President of these United States.

During the book tour, Adam did a Q&A and book signing in Naperville in conjunction with Anderson’s Bookshop.  Purchasing the book from them got me a spot in the autograph line for a quick meet and greet and photo, along with the autographed book. 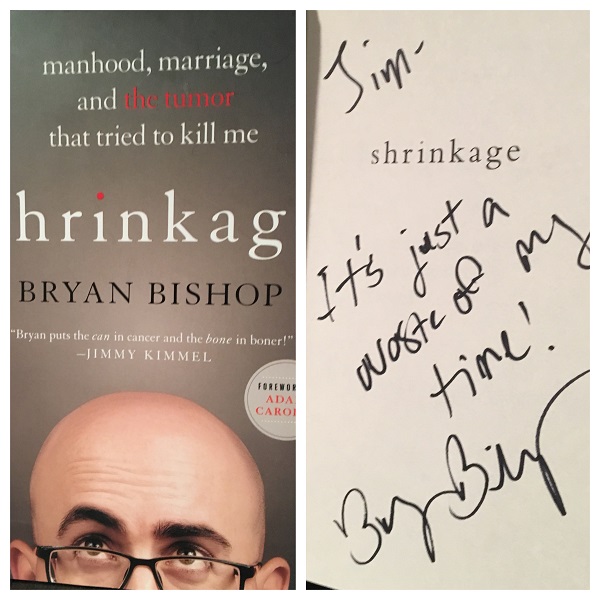 Week 2 of our look at the hardcover books I’ve gotten autographed over the years is the most recent addition to my collection.  Shrinkage, a memoir from Adam Carolla Show lackey Bryan Bishop about his experiences fighting off an inoperable brain tumor, came out in 2014 and was the 9th book I read that year.

The autograph was acquired a few weeks back, after a live podcast performance at the Vic.  The quote is one of the more famous drops from the show, selected by Bryan when I couldn’t come up with a favorite of my own.

A good week, as I managed to surpass the 6000 goal mark every day for the first time in a month.  The week started with a great day on Sunday thanks to a trip to Busse Woods with Hayley.  We never did find our way to the pow wow she was looking for, but I ended up over 11,000 steps.  Monday was the low point of the week, finishing just above 6000 steps.  Tuesday was nearly at 8500 steps, with the remainder of the work week hovering between 6400 and 7500 steps.  Saturday benefitted from a trip in to the city to see the Adam Carolla Show tape a podcast at the Vic and the requisite parking quite a ways away.

Daddy, Stop Talking! & Other Things My Kids Want But Won’t Be Getting – Adam Carolla

The latest output from Adam Carolla, ostensibly a parenting book with advice given to his children, made its way onto my Kindle app recently thanks to a sale at Amazon.  Daddy, Stop Talking! is, once again, basically a transcript of rants from Carolla’s daily podcast transcribed for people who apparently need to read what they have already heard.  It was the same issue that I had with his previous book back in 2014, the lack of new content.

But, as I said 2 years ago, if the price of daily entertainment in the form of a free daily podcast is occasionally buying a book, especially when it comes in under $3, then it is a small price to pay.  If his first two books ever show up on special, I’ll probably splurge on them as well.  And have the same complaints.

3 years ago, we first counted down the then Top 100 songs in my iTunes library. Since that time, I’ve successfully managed to migrate my music collection to a new PC with the stats intact. So, I figured it was time to take another look, expanding out the field to the top 200 songs, based on number of plays as of January 1, 2016.

We continue today with the fourth, and final, grouping of songs tied for 167th place with 17 plays apiece and finally break into the group tied for 141st place with 18 listens since late 2007.

Two entries from the 6th season musical episode of Buffy The Vampire Slayer.

The first single from Blur’s third album, it reached #5 on the UK charts #4 on the US Modern Rock charts.

The single went to the number one spot in the United States, United Kingdom, Ireland, West Germany, Australia, New Zealand and Norway.

We finally move up in plays, starting with the theme song to the CBS staple of the early 1980s.